Wednesday’s total lunar eclipse was a treat, as we were treated to mostly clear skies and the moon was never more than a minute or two out of view as the clouds moved overhead. I set my digital camera on a tripod and proceeded to get several pictures of the event. It’s useless to try to get a video of the event, as it happens so slowly, but with good timing I managed to get one good pic every 5 minutes or so. I put them into a video, and to simulate a proper video I had each picture fade into the next over 5 seconds. This made a video of the eclipse that was about 60 times as fast as the real eclipse occurred:

As the eclipse progressed to totality, I edged up the exposure so that the area darkened by Earth’s shadow (called the “umbra”) became visible. It turns a haunting red color, for the same reason the sunset turns red. The Earth’s atmosphere refracts the red light from the sun and it lights up the darkened portions very dimly, although quite visible with the naked eye; I always imagined this would mean that, if you were on the moon at the time (it would be a solar eclipse there), you’d see the blackened Earth surrounded by a sunset-red halo. It must be beautiful. I had to go to bed, so I didn’t get anything after totality, but at that point it’s mostly the same thing in reverse.

The lunar eclipse has always been the stuff of history. According to legend, Christopher Columbus saved his life in the New World with a well-timed lunar eclipse, his foreknowledge of which convinced the locals that he had a special relationship with God. Also according to folklore, Columbus was a genuis who knew the Earth was round, where most everyone else, including his fearful crew, believed it was flat and they would fall off if they sailed too far. I don’t know about the eclipse legend, but the second claim is complete bogosity. It was widely known that the Earth was spherical at least since the 2nd Century BC, and the lunar eclipse is one big reason why.

The reason why we don’t have a lunar eclipse every month is because the moon’s orbit is tilted about 5 degrees with regards to Earth’s orbit around the Sun. So a total lunar eclipse only happens when the three bodies align at the time of the full moon. It doesn’t happen often, but wherever you are you should see one every few years or so. That’s enough to do several good observations in a single lifteime and share those observations with others.

One observation is that the curve of the Earth’s shadow is the same no matter where the moon is in the sky when the eclipse occurs. That can only occur if the Earth is a spheroid. Not only that, but you can also deduce the ratio of the size of the Earth to the size of the moon (which, by the way, is about 3.67:1). I’ve illustrated that with this picture: 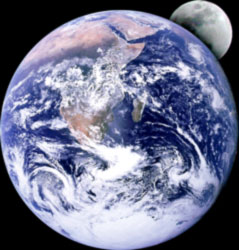 Here, I’ve made the Earth (photo from NASA) its proper size relative to the moon using one of the eclipse shots I took (if you like this picture, click it for a 1024×768 version suitable as a wallpaper). Notice that it fits the curve of the shadow perfectly. Our ancient ancestors noticed that, too, and so they knew not only that the Earth was spherical, but also how big it was relative to the moon. Eratosthenes, after his brilliant calculation of the size of the Earth, could then deduce the size of the moon–both of which he got to within 1% of the correct answer (using the most generous length for the “stadium”).

Never underestimate how clever human beings are, or how much can be learned by just looking up and using your mind.

Presidential predictions are pretty much bogus. Telling ahead of time who’s going to win has proven to be very unreliable. For the last three elections (probably more), I’ve seen all sorts of people use all sorts of indicators–economic-based, poll-based, even sports-based–about how such-and-such has “predicted” 14 of the last 15 elections (always after the fact, of course). Clinton just wasn’t going to be re-elected in 1996. No way could Bush win in 2000. And no way could he be re-elected in 2004. I think it’s clear that using these “predictors” is just another form of selection bias, and that we should pay no more attention to these than to people who tell us how to predict how many babies will be born based on the phase of the moon or how to make a killing in the stock market.

So I may be going out on a limb here with my prediction, but I think that history will bear me out. I will not attempt to predict who will win the Democrat or Republican nominations, or who will run under what third parties, or who will be our next President.

But I will make the following prediction: no matter who gets nominated, people on the other side will say that this person is so horrible that you must vote for their candidate to keep this very dangerous person out of office. Of course, those on the other side will say the same about their candidate. They’ll both be telling us that this election is so important, that this time there’s so much on the line, that this time you have to tolerate the lesser evil in order to save the country from certain doom. That it is so important that you just cannot waste your vote voting your conscience, since that conscience may take you to a third-party candidate and thus take a vote away from the only person who has a chance of beating this severe threat to our very way of life.

In fact, this will be the worst, most severe, most dire, most crucial, most vital election, where we all have to make the biggest, most important decision we have had to make…

That’s my prediction, and I’m standing by it.

Many pundits (when they can tear themselves away from the primaries for long enough) express complete horror and dismay at the fact that last month oil prices reached $100 per barrel.

However, that still means that it’s cheaper to get half a pound of oil from halfway around the world than it is to mail a 1-ounce letter across the street.